THE BOARD OF THE FOUNDATION

Het Sint Geertruidsleen is an independent foundation, and consequently entirely independent from the local church. 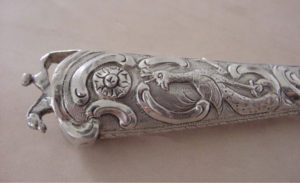 The Board of the Foundation consists of three churchwardens of the Protestant Congregation of Oosthem, Abbega, and Folsgare. They appoint an administrator and a secretary who is responsible for the financial affairs of the foundation and who maintains the contacts with the students, respectively.

There are two supervisors (guardians) and at least two joint meetings are held every year. The spring meeting is held in Blauwhuis in the local pub and adjoining restaurant, where the Goffa meal will be served afterwards. One of the traditional dishes served during this meal is a fillet steak. This traditional dinner was introduced by the testator and is still respected. The meat is cut by the chairperson of the joint meeting with a very old plate knife.

Once a year, in July, a ballot day is organised on which the students invited can explain their applications. The committee established for this purpose recommends the joint meeting on the basis of its findings who qualify for a scholarship (a loan without the obligation to pay back and without interest). Although the above implies that only protestant students would be able to use the Sint Geertruidsleen, this is not the case. After all, the scholarship was originally a Roman-Catholic family fund. However, relatives and/or theology courses still have priority.